Can Artificial Intelligence become a newly defined muse machine? Can A.I. spark and empower inspiration and creativity? If so, then how can A.I. push the limit of creating music beyond the imagination? With the end of 'A.I. for Good Summit’ in Geneva, Switzerland, a California-based A.I. music startup entitled Mercury Orbit Music has sparked attention from the audience by satisfying those intriguing and meaningful questions with their stage presentation. In their stage presentation, the startup particularly focused on introducing a suite of state-of-the-art A.I. music generation tools, featuring unparalleled integration that allows an extensive range of music scenarios. 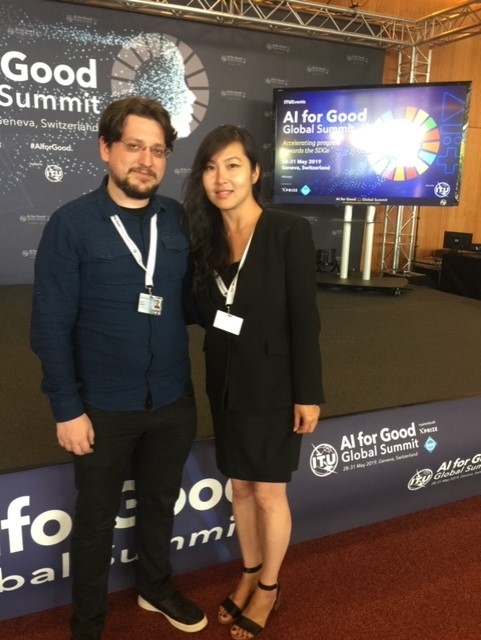 (The founder and C.E.O of Mercury Orbit Music Yang Zhang and the technical director Dimos Makris at AI for Good Summit)

As the largest interdisciplinary A.I. Summit partnering with the United Nations, ITU (International Telecommunication) and , 'AI for Good Summit’ invites and involves leaders and experts from the United Nations, governments, industries, academia, and the media. Moreover, it gathers experts with outstanding achievements in various fields of A.I. to contribute to and support the United Nations’ sustainable development goals.

As the only A.I. music technology among the top 30 A.I. technologies selected by AI in 2018, Mercury Orbit Music claims that they have a remarkable capacity to invoke the capability of pursuing the coexisting creativity between humans and machines. In to venture out a genuinely creative and intuitive nature of A.I., the startup follows the paradigm of intuitive computing. The core component of A.I. generation tools that the team has built are centered around the creative environment based on the users' choices. They have designed and implemented a novel A.I. music platform that allows interaction with the users and generates new musical material for kick-starting user inspiration.

“We are committed to breaking a sense of technological singularity, where we can train A.I. to think, , perceive, and resonate with users in a stimulating way. We distinguish ourselves from the earlier generation of A.I. music technology through the paradigm of intuitive, explainable nature of A.I.; eventually, the system can blend a variety of attributes from a diversity of music styles, that allows generating a unique musical composition to users and becomes a personalized

music maker." Said Yang Zhang, the Founder, and CEO of Mercury Orbit Music, while talking about her company's presentation with the technical director Dimos Makris at the summit in Geneva. "At this stage, we focus on Midi symbolic representation technique; the system we are developing offers a promising opportunity to integrate other aspects in depth," Dimos added.

During their stage presentation, the team of Mercury Orbit Music highlighted a dynamic example of how human intelligence in the creative decision-making process is being incorporated with A.I. music generating features based on various music learning subjects. During this example of human-machine creative collaboration, a jazz musician utilities an A.I.-made musical environment as a kick-starting inspirational material, then improvises his melody over the chord changes by interacting with his students. This dynamic demonstration allows an extensive range of imagination that can also apply and expand in the music consumption sector.

The whole team at Mercury Orbit Music highlights an interdisciplinary structure, which is led by the award-winning composer (the of the best original music at the 2016 Montreal Views of Worlds Film & Music Festival) and Emmy music peer member Yang Zhang. She teams up with A.I. music scientists featuring Dimos Makris, who has distinguished his research among others with very original Conditional Neural Sequence Learner Architecture, and Maximos Kaliakatsos-Papakostas, who has already published more than 40 articles in the combined field of Artificial and Computational Intelligence, Music, Machine learning, Computational Creativity, and Cognitive Musicology, along with two music industry veterans, namely, music publisher Andrew Robbins (who successfully secured multiple music placements for the Oscar-winning pictures “The Shape of Water” in 2018 and “Crash” in 2004) and two-time Grammy-nominated