The overall pest control market is projected to grow from USD 20.5 Billion in 2019 to USD 27.5 Billion by 2025, at a CAGR of 5.04%. The rise in the popularity of pest control solutions can be attributed to the increasing scope of urbanization in developing markets and the emergence of megacities, which host over 15-20 million residents. Markets such as China and India are among the key markets targeted by pest control service providers and pesticide suppliers due to their high population density and a large middle-class population that is adopting pest control services in the region. 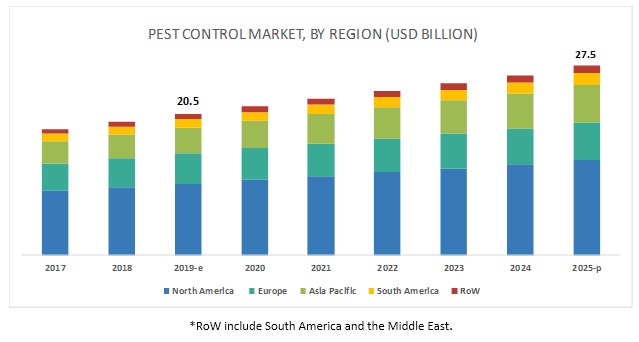 Insects are the major pest type driving the growth of pest control market during the forecast period.

The insects segment dominated the pest control market due to the high prevalence of insects such as bedbugs, flies, mosquitoes, and wasps. The prevalence of insects is high in all the regions; hence, the demand for pest control for insects is high, globally. According to the World Health Organization, mosquito bites result in the deaths of more than 1 million people, every year; the majority of these deaths are due to malaria. Therefore, pest control is largely carried out to eradicate/kill mosquitoes. As per the UK Climate Projections 2018 study, the summer temperatures could be 5.40C hotter by 2070. With climate change and rise in temperature, the population of flies is projected to increase by 244% from 2015 to 2080, according to the World Health Organization (WHO). This, in turn, is projected to increase the demand for insect pest control in the Europe. Thus, rising temperature is one of the major factor for increased prevalence of insects and thus increasing demand for insect pest control globally.

Asia Pacific region is projected to witness the highest growth in the pest control market by 2025.

The Asia Pacific region is among the fastest-growing regions for pest control. The region’s high concentration of urban population and urbanization poses a strong potential for pest control service providers. The effects of climate change and in certain cases, the negligence toward sanitary conditions in urban slums has resulted in multiple disease outbreaks. Improvements in legislation and policies surrounding the requirement of pest control have benefitted pest control service providers in the Asia Pacific region. Additionally, the region has also been susceptible to many pest-borne disease outbreaks in the last two decades. From the last quarter of 2015, there has been a significant number of cases related to Zika virus in the region. Zika virus is a mosquito-transmitted Flavivirus and has been detected in several countries in the Asia Pacific region, which include Thailand, the Philippines, Malaysia, Vietnam, and Indonesia. According to a WHO report (October 2016), the Asia Pacific region is highly likely to continue to report new cases and possibly new outbreaks of Zika virus. Thus, with increasing outbreaks of diseases due to insects, the demand for pest control services is projected to increase in the region.