Bitcoin dropped about 10 percent this week despite calls that it would rally on the back of major blockchain conference held in New York City.

● Last year, bitcoin rallied 69 percent during the Consensus conference, according to Fundstrat.

● "Many repeat attendees commented that the panels felt more like commercials than substantive discussions, which was not the case last year," says Fundstrat digital currency analyst Alex Kern. 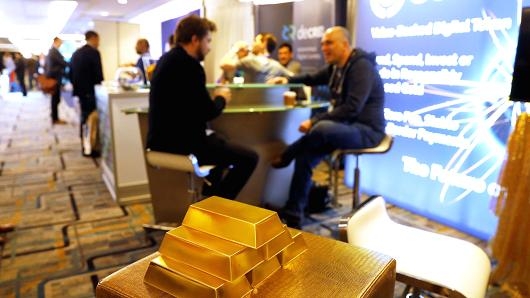 Despite calls that bitcoin would rally throughout New York City's "Blockchain Week," the cryptocurrency's price has dropped about 10 percent since the festivities kicked off.

"Many repeat attendees commented that the panels felt more like commercials than substantive discussions, which was not the case last year," said Fundstrat digital currency analyst Alex Kern.

In previous years, bitcoin had rallied significantly around a New York City blockchain conference called Consensus. Between May 22 and 24 when it was held last year, prices jumped 69 percent, Fundstrat said. Prices popped another 138 percent in the two months after the conference.

In a note to clients published ahead of this year's event, Fudstrat predicted a bump "likely greater" than in previous years "given dramatic jump in attendance plus the fact BTC is down YTD."

Instead, prices stayed in the low $8,000 range throughout the week, according to CoinDesk. Bitcoin hit a high of $8,835 last week before blockchain enthusiasts flocked to New York. The cryptocurrency has dropped more than 40 percent this year.

"While there was not a Consensus bump, our conviction on crypto-currencies strengthened during the conference," said Fundstrat co-founder Tom Lee, who is the only major Wall Street strategist to cover bitcoin.

Lee even went as far as to say Friday on CNBC's "Fast Money" that Consensus was a "huge success."

"It's a great conference to bring a lot of people together from around the world. And I think the quality of the people that were there," Lee told CNBC. "It's amazing."

"It's the people that you know are important to this industry coming together," he said. "But also a lot of decision-makers incremental."

Lee called bitcoin and other cryptocurrencies' declines, "growing pains," and pointed that that the conference has more than tripled in attendance since last year.

In fact, this year's Consensus conference drew in more than 8,500 attendees, according to Barry Silbert, CEO and founder of parent company Digital Currency Group. CoinDesk reported 2,700 attendees for the May 2017 conference. At roughly $2,000 a ticket, the conference raked in at least $17 million in ticket sales alone.

Many attendees had to wait more than an hour to register at CoinDesk’s Consensus 2018 conference at the New York Hilton Midtown. 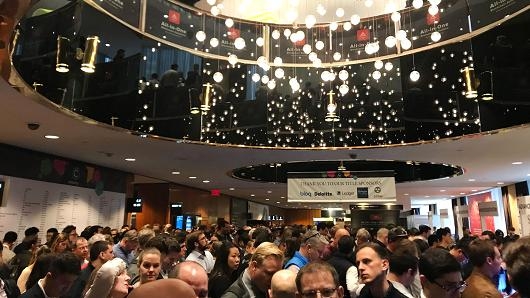 More than 20 other events happened as part of a "Blockchain Week NYC," an event run in partnership with the New York Economic Development Corporation. Among the private, post-conference festivities: Snoop Dogg performed in the West Village for crypto start-up Ripple, and a new venture called rented out the 210-foot party yacht "Cornucopia Majesty."

Z-cash is one of the the only major cryptocurrencies to rally this week after trading platform Gemini announced it would list the coin on its licensed exchange.

Other major cryptocurrencies struggled this week. Since Monday, ethereum has fallen roughly 9 percent, bitcoin cash is down 22 percent, and litecoin and XRP have both dropped 12 percent.