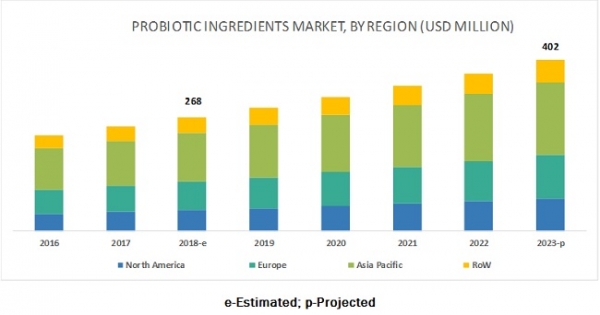 The wide application of probiotic strains in the manufacture of end products such as cheese, yogurt, and other dairy products has spurred the growth of this segment. Within functional foods, the most widely used probiotic bacteria belong to groups such as lactic acid bacteria and bifidobacteria, besides yeast. Due to their presence in the intestinal flora of the host, they are considered to be safe for consumption and for wide application in the fermented foods and dairy products industry.

The bacterial segment is projected to hold the larger market share as it offers various health benefits. The most commonly used strains in the manufacture of probiotic products are gram-positive bacteria, which belongs to the genus Bacillus and yeast strains that belong to the genus Saccharomyces. For instance, Lactobacillus acidophilus when consumed orally is able to prevent infections in the vagina and also aids in nutrient absorption, while Bifidobacterium infantis helps the host combat bloating, diarrhea, constipation, and ulcerative colitis.

Probiotic microorganisms are usually supplied in the form of culture concentrates, either in the dried or deep freeze form, for use in the food industry. The semi-liquid probiotic strains are usually offered in the form of gels and paste. Liquid probiotic strains are used in the production yogurt and buttermilk and are not available widely as compared to dry strains due to its shorter shelf life and the requirement of refrigeration during the transportation process.

The Asia Pacific region is projected to hold the largest market due to the natural predisposition among consumers in this region for taking supplements. China, India, and Japan are estimated to be the primary drivers of this market with China projecting its growth in the segment of infant formula within probiotics. There is also a growing awareness among the people in India and Japan about using alternatives such as probiotics for the treatment and prevention of lifestyle disorders. The probiotics are gaining popularity in the Asia Pacific market particularly in the animal nutrition segment due to the growing concerns about their health and productivity.

The major players in the probiotic ingredients market are Kerry (Ireland), DowDuPont (US), CHR. Hansen (Denmark), Biogaia (Sweden), Probi (Sweden),Glac Biotech (Taiwan), Bifodan (Denmark), Lallemand (Canada), UAS Laboratories (US), and Biena (US). Of these companies, CHR Hansen, DowDuPont, Lallemand and Kerry have held the largest market share of 70% in the probiotic ingredients market. These companies are focusing on agreements and product launches to establish themselves in the market.

i never know the use of adobe shadow until i saw this post. thank you for this! this is very helpful. טיסה זולה לפראג