The global agricultural pheromones market size is estimated to be valued at USD 2.9 billion in 2021. It is projected to reach USD 6.1 billion by 2026, recording a CAGR of 16.1% during the forecast period. The preference for conventional insecticides is declining. The recent ban on insecticide groups of neonicotinoids, such as thiamethoxam and fipronil, by the European Union is also a key factor that is projected to drive the growth of the agricultural pheromones market in Europe. Despite the growing awareness about IPM through government initiatives, crop growers are increasingly dependent on conventional inputs to increase crop productivity. However, significant growth in the application of pheromones for crops, such as grapes, cotton, sugarcane, peaches, okra, and oil palms, is witnessed in the region. 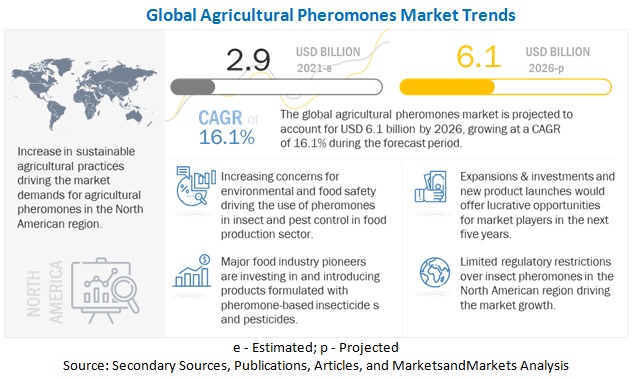 Impact of Covid-19 on the global agricultural pheromones market

Since the onset of the COVID-19 pandemic, consumer preferences have shifted toward consuming healthy and organic food products to maintain health and improve immunity. Other emerging industry trends, including consumption of safe, natural, clean-label, and pesticide-free products, have also changed the scenario of agriculture across the globe. COVID-19 is projected to have a considerable impact on the growth of the agricultural pheromones market. In the optimistic scenario, it is assumed that the impact would be positive, and crop protection manufacturers are willing to buy agricultural pheromones, considering the rise in demand for clean organic products and insect & pest-free environments. In addition, as the trade barriers would be relaxed to rebuild economies, trading will be easier.

Integrated pest management strategy primarily focuses on the long-term prevention of pests by implementing techniques, such as biological control, modification of cultural practices, and utilization of resistant variants. The extensive knowledge of the pest life cycle and their interaction together with the employment of different pest control methods result in appropriate pest management with the least hazard to animal and human health. Therefore, farmers across the globe are focusing on such methodologies to decrease the environmental risks linked with pest management.

Detection and monitoring is projected to be the fastest-growing segment, by function during the forecast period.

Insect sex pheromones are used for the detection and monitoring of the insect population. In most cases, males get attracted to the sex pheromones produced by female insects. For this purpose, trap baits are designed to closely reproduce the ratio of chemical components and emission rates similar to female insects. Pheromone traps are used to detect the invasion of adult pest species from one region to another. These traps are used to track the influxes of various insect pests, such as black cutworm, gypsy moth, and pink bollworm. For the purpose of monitoring, the traps help in predicting the inception of a lifecycle stage in the insect population. Pheromone traps help growers identify the exact location and diffusion of infestations, detect the entry of exotic species, and adjust the timing and rate of pesticide application for maximum effect and minimum environmental damages.

The North America region dominated the agricultural pheromones market and is projected to grow at the highest CAGR of 16.9% from 2021 to 2026.

The market for pheromones is growing in North America owing to the widening scope of applications in not only agriculture but also in forestry and for industrial purposes, such as in the food and pharmaceutical industries. ISCA produces a formulation to control noctuid moths on row crops that acts as a mating-disruption for the gypsy moth that is used by the US Forest Service. Some of the majorly grown agricultural crops in the region include cotton, tomatoes, grapes, corn, pome fruits, and stone fruits. These are some of the crops that are prone to attacks from various insect species, such as the pink bollworm, leaf miner, codling moth, and berry moths. In North America, pheromones are used for mating disruption purposes.