The report "Feed Yeast Market by Type (Probiotic Yeast, Brewer’s Yeast, Specialty Yeast, and Yeast Derivatives), Livestock (Cattle, Swine, Poultry, Aquatic Animals, and Pets), Genus (Saccharomyces spp. and Kluyveromyces spp.), and Region - Global Forecast to 2023", The feed yeast market is projected to reach USD 2.1 billion by 2023, from USD 1.7 billion in 2018, at a CAGR of 5.27% during the forecast period. The market is driven by factors such as ban on the use of antibiotics in feed and increasing use of yeast as a nutritional supplement for livestock. 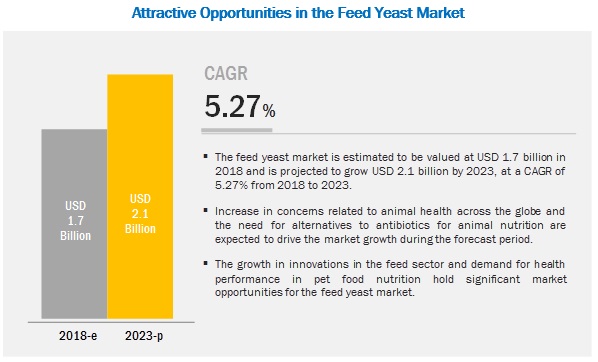 On the basis of genus, the Saccharomyces Spp. segment is projected to be the fastest-growing segment during the forecast period.

Saccharomyces cerevisiae has been the most widely adopted yeast for various applications, including feed. Majority of the key players such as Associated British Foods plc. (UK), Cargill (US), and Lesaffre (France) have been providing feed yeast with Saccharomyces formulation. According to the FAO, besides Saccharomyces spp., Candida spp. (a part of which was formerly known as Torula) has been gaining traction as a probiotic yeast in feed application in North America. Of the various probiotic strains registered with the FAO in 2017 for animal nutrition, only Saccharomyces and Candida are approved for probiotic application in the feed industry.

The increasing awareness of health benefits associated with probiotic yeast has widened the scope of growth for the feed yeast market.

The use of probiotic yeast in ruminant feed resulted in improved health and higher milk production. Similarly, in pigs, yeast triggers an immune response to reduce the entry of pathogens in the body and also reduces the occurrence of post-weaning diarrhea. With the increasing use of probiotics for animal nutrition, growth promotion, and gut health development, the probiotic yeast segment is projected to record the fastest growth, on the basis of type, during the forecast period.

On the basis of livestock, the aquatic animals segment is projected to witness the highest growth in the feed yeast market.

A rise in fish farming practices in the developing countries of the Asia Pacific due to the increased profits through farmed fish cultivation over the past 10 years. In addition, the increasing fish consumption in regions such as Europe and South America encourages fish farming, which would further drive the feed yeast market in the aquafeed segment. Supplementing feed yeast in right quantities to aquatic animals leads to an optimal supply of essential nutrients.

The Asia Pacific is projected to witness the highest growth in the feed yeast market during the forecast period.

As per the FAO figures of 2017, the consumption rate of meat products in East Asia had witnessed rapid growth. The consumption rate reached 50 kg per person in 2015 from nearly 9 kg per capita in the 1960s. However, the ban on the use of antibiotics as a growth promoter in the livestock sector across the European and North American countries has indirectly impacted the Asia Pacific countries. This has encouraged key companies of feed additives to develop natural growth promoters and health supplements. Since the ban, the livestock producers had identified innovative ways to promote animal production through products with similar benefits by replacing antibiotic growth promoters with microbial-based feed additives, which possess antibiotic properties. Many key players such as Lallemand Inc. (Canada) and Angel Yeast (China) are focusing on tapping the Asia Pacific market by setting up their feed additive manufacturing units.

There are many local and global players that provide feed yeast for different industry verticals including the feed industry, which holds a strong demand for yeast. Multiple companies are major suppliers of yeast in more than one industry, and hence, the end-use applications for their products are not mentioned. Hence, the scope of this report includes a detailed study of those yeast and feed yeast manufacturers whose portfolio mentions the end use as feed, such as Associated British Foods Inc. (UK), Archer Daniels Midland Company (US), Alltech Inc. (US), Cargill (US), Angel Yeast Company (China), Chr. Hansen (Denmark), and Lesaffre (France). Various strategies such as acquisitions, joint ventures, and new product launches were adopted by companies, to enter the feed yeast market.