40
Part 1: Season Finale Of The Bachelorette!

Hannah Brown's season has come to a close. The Bachelorette season 16 aired its season finale with two two-hour episodes. This past Monday, the episode left off showing the top 3 men- Jed, Tyler, and Peter.

She had one person to send home and that was Pilot Peter. It has been revealed that he was the windmill guy, yet it was obvious he was going home because Hannah obviously had a stronger connection with Jed and Tyler. It was quite an emotional breakup as Peter was clearly shocked and heartbroken. The episode then transitions into the live audience where Chris Harrison sits down with Peter and talks to him about the breakup. He reveals that he was in love with Hannah and it was hard watching back this episode. His parents had a moment to share their thoughts and they showed more remorse for their son. 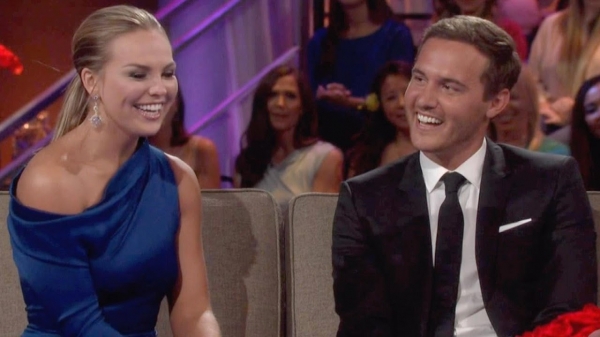 Then, Hannah comes out to speak with Peter. She reveals that by far this was the hardest breakup she had to go through because she had a connection with him. Nothing went wrong, there was nothing wrong with Peter, but her heart was towards two other people. After receiving closure, the atmosphere becomes more lighthearted as Hannah reveals that the windmill incident did not happen 2 times but 4 times! :o Everyone in the audience uproars in excitement, especially Peter's parents. Watching this, I can't help but feel awkward. Right? Who else felt that way?

After the commercial break, Jed and Tyler meet Hannah's parents. Tyler has his time first and Hannah's parents are smitten over him. Again, Tyler says the right things and he gives off the best first impression. He has definitely won over their hearts and both Hannah and Tyler have a great time with Hannah's family. Jed is next. He comes over and he, on the other hand, does not have a great time. Hannah's parents are very critical and questions his future and career. I think as a parent, I would question it as well. To be honest, Jed's career as a singer/songwriter is not the most stable job. After the parents talk with Jed, Hannah comes over to talk with them and she gets quite upset that her parents are only concerned about this. This is when I thought Jed is her frontrunner because she badly wanted her parents to like Jed but that wasn't the case.

Who will Hannah pick?