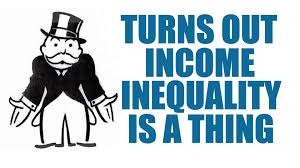 Over the past decades, the gap between high- and low-income Americans has grown substantially, and should those trends continue, a large swath of future seniors could face a bleak retirement future.

Working for the Urban Institute, a trio of researchers set out to examine the long-term effects of the income gap on the future of U.S. retirement, projecting earnings for various groups of earners through 2085. And depending on where you happen to sit on the income ladder, things are about to become either much better or much worse.

If the current difference between the earning power of college-educated Americans and their high-school-graduate counterparts continue, lifetime income for the lowest fifth of people would drop 2% by 2045, 5% by 2065, and 9% by 2085.

“The impact would reverberate into retirement, because Social Security benefits are tied to lifetime earnings, and how much people can save for retirement depends on how much they earn,” the group — Damir Cosic, Richard W. Johnson, and Karen E. Smith — wrote in the report, released at the end of last month.

The news is better for those in the top quintile, who would see overall lifetime income rise by 2%, 5%, and 8% in those three years; accounting for just incomes achieved between 67 and 75, those increases would work out to 3%, 5%, and 7%.

The Urban team came up with multiple policy suggestions to help mitigate these long-term trends, including raising the federal minimum wage from $7.25 per hour to $12, but the researchers note that such a change would only help offset and not completely eliminate the problem.

They also warned that their findings relied solely on examining the so-called “education gap” in earnings, and did not take into account other long-term macroeconomic trends — such as fast-growing income for the top 1% of earners at the expense of remaining workers.

“Because our projections do not account for these increases at the very top of the wage distribution, our estimates may understate the future growth in wage inequality,” the team wrote.

Furthermore, the results were derived under the assumption that seniors would continue to receive their full Social Security benefits for the duration of retirement. The government, however, has projected that the program will only allow for full benefits through the mid-2030s, with beneficiaries receiving only about three-fourths of their earned Social Security income thereafter.

“Cuts to Social Security could reshape the distribution of future retirement income,” they note.

Outside of upgrades to the social safety net and a higher minimum wage, the team recommends that the government offer financial literacy classes for all workers, while also requiring employers that do not offer pensions to automatically place a portion of employees’ wages into retirement accounts.

“Together, these programs could provide all workers with a path to retirement security even as wage inequality grows,” the authors concluded.

Hello I am so delighted I located your blog, I really located you by mistake, while I was watching on google for something else, Anyways I am here now and could just like to say thank for a tremendous post and a all round entertaining website. fuzail - 2019-02-12 00:28