The report "Top Trends in the Agricultural Biologicals Market by Agricultural Biologicals, Biocontrols, Biofungicides, Bioinsecticides, Bionematicides, Biostimulants, Biofertilizers, Agricultural Inoculants, Agricultural Pheromones, Biological Seed Treatment - Global Forecast to 2025", is projected to grow at a CAGR of 13.7% from an estimated value of USD 9.9 billion in 2020 to reach USD 18.9 billion by 2025. The market is driven by factors such as increased awareness towards organic food, growing concerns about the hazards of using chemicals, demand for high-value crops, and increase in awareness about residue levels in food, and favorable regulatory framework for the application of agricultural biologicals products are some of the key drivers for growth in agricultural biologicals market. 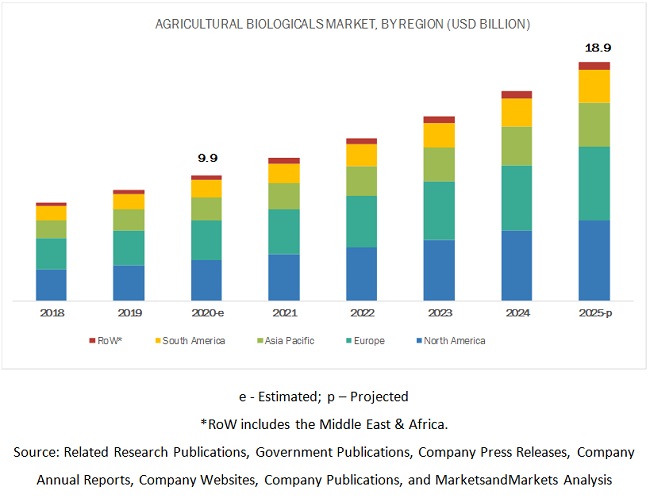 Bionematicides are the fastest-growing trend in the agricultural biologicals market. Nematodes result in a heavy infestation of the plant parts such as roots, leading to heavy losses of crops every year. The major challenge is to feed the growing population and ensure food safety. It doesn’t kill the plant but hampers the growth of the plant, due to which bionematicides are gaining importance across the world. The growing concerns related to the application of crop protection chemicals and the gradual phase-out of key active ingredients used to control nematodes are some of the key drivers for the growth of the bionematicides market.

Bioinsecticides are projected to stand second, in terms of the fastest-growing trends, during the forecast period from 2020 to 2025. The rising awareness about technology in agriculture, high-value crops, and increased level of pest attacks due to various factors are the major drivers for the growth of bioinsecticides market. Various high-value crops such as corn, soybean, potato, and tomato face strong infestation by insects. Hence, bioinsecticides are experiencing high demand across regions, especially in North America. Bioinsecticides are widely adopted in North America due to high awareness about the growing concerns over the application of pesticides and increasing area under organic farming, which are also driving the market for bioinsecticides in this region.

The need to maintain a minimum residual level in food products and high growth prospects for organic food has been driving the agricultural biologicals market in these regions. Developed countries adopt modern agricultural practices and have strict regulations to limit excessive agrochemical applications. Therefore, the markets in Europe and North America are influenced by such drivers. The awareness regarding the sustainable benefits of biologicals has promoted the growth in developing countries such as Asia Pacific and South America.

This report includes a study of the marketing and development strategies, along with the product portfolio of leading companies. These companies include BASF SE (Germany), Bayer AG (Germany), UPL (India), Marrone Bio Innovations (US), Corteva AgriSciences (US), Valent BioSciences (US), Koppert Biological Systems (Netherlands), and Certis USA LLC (US), which are some of the well-established and financially stable players that have been operating in the industry for several years. Other players include Valagro S.P.A. (Italy), Syngenta AG (Switzerland), Stockton Bio-AG (Israel), Valent BioSciences (US), and Rizobacter Argentina (Argentina), among others.