With time counting down, the NBA is becoming more and more intense. Without a doubt the NBA is a place where magic happens. It’s the playoffs and the time is closing. Who will be the 2019 NBA Champions. We have the super team of the Warriors that seem to be unstoppable when everyone is healthy, but can any team in the West compare? Will the teams of the East be able to stand toe to toe with a team with 5 All Stars in a starting lineup? It might be hard, but we will have to see where the East ends up. Will Giannis be able to lead his Bucks to the NBA finals for the first time in his career, or will they be taken down by Kyrie and the Celtics who are coming off with a 4 game sweep over the Pacers. 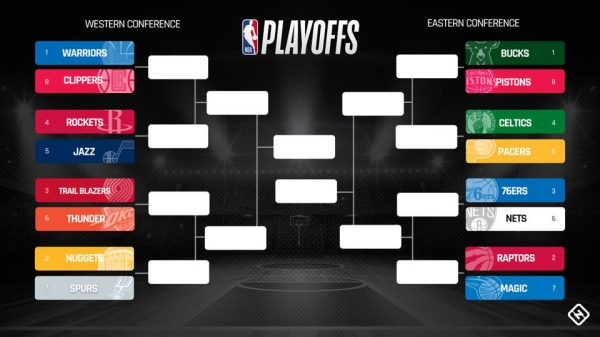 However, we can’t leave out the Toronto Raptors who have been playing some pretty good ball ever since Kawhi has come into the picture. It’s all up for grabs this year in the East since Lebron left the Cavs for the Lakers which he was able to help them improve their last season’s record, but only by a few games. Clearly the team roster will be much improved for Lebron’s liking next season which includes a new coach. Back to the action! Can any team in the West stand in the way of the Warriors or will they knock down every team with simplistic ease. Will Harden or Lillard be able to overcome the odds and pull a fast one on the Warriors or will they be like the Clippers who could take a game off of them, but ultimately end up losing the series. We will all have to wait for what the series will turn out to be. My hope is we get some game 7s coming soon. Hopefully Warrior vs Rockets go 7 as well as Bucks vs Celtics. I am hoping we see the Warriors vs the Bucks in the NBA Championships.

Let me know what your thoughts are below!

Who do you think will win this year?