194
The 7 Habits of Highly Effective People 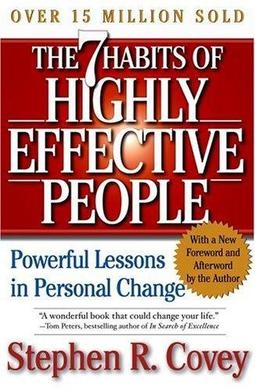 The 7 Habits of Highly Effective People, first published in 1989, is a business and self-help book written by Stephen Covey. Covey presents an approach to being effective in attaining goals by aligning oneself to what he calls "true north" principles based on a character ethic that he presents as universal and timeless.

Covey defines effectiveness as the balance of obtaining desirable results with caring for that which produces those results. He illustrates this by referring to the fable of the goose that laid the golden eggs. He further claims that effectiveness can be expressed in terms of the P/PC ratio, where P refers to getting desired results and PC is caring for that which produces the results.

Covey's best-known book, it has sold more than 25 million copies worldwide since its first publication. The audio version became the first non-fiction audio-book in U.S. publishing history to sell more than one million copies. Covey argues against what he calls "the personality ethic", that he sees as prevalent in many modern self-help books. He promotes what he labels "the character ethic": aligning one's values with so-called universal and timeless principles. In doing this, Covey is deliberately and mindfully separating principles and values. He sees principles as external natural laws, while values remain internal and subjective. Our values govern our behavior, while principles ultimately determine the consequences. Covey presents his teachings in a series of habits, manifesting as a progression from dependence through independence on to interdependence.

2 - Begin with the end in mind

Envision what you want in the future so you can work and plan towards it. Understand how people make decisions in their life. To be effective you need to act based on principles and constantly review your mission statement. Are you - right now - who you want to be? What do I have to say about myself? How do you want to be remembered? If habit 1 advises to change your life to act and be proactive, habit 2 advises that you are the programmer! Grow and stay humble.

All things are created twice. Before we act we should act in our minds first before we create something we measure twice. This is what the principle is about, do not just act, think first; is this how I want it to go and are these the correct consequences.

Matrix of importance vs urgency that Stephen Covey and Dwight D. Eisenhower used in deciding where to invest their efforts.
Talks about the difference between leadership and management. Leadership in the outside world begins with a personal vision and personal leadership. Talks about what is important and what is urgent. Priority should be given in the following order (in brackets are the corresponding actions from the Eisenhower Matrix):
Quadrant I. Urgent and important (Do) – important deadlines and crises
Quadrant II. Not urgent but important (Plan) – long-term development
Quadrant III. Urgent but not important (Delegate) – distractions with deadlines
Quadrant IV. Not urgent and not important (Eliminate) – frivolous distractions
order is important; after completing items in quadrant I, we should spend the majority of our time on II, but many people spend too much time in III and IV. The calls to delegate and eliminate are effective reminders of their relative priority.

If habit 2 advises that you are the programmer, habit 3 advises: write the program, become a leader! Keep personal integrity: what you say vs what you do.

The next three habits talk about Interdependence  (e.g., working with others):

Genuine feelings for mutually beneficial solutions or agreements in your relationships. Value and respect people by understanding a "win" for all is ultimately a better long-term resolution than if only one person in the situation had gotten their way. Think Win-Win isn't about being nice, nor is it a quick-fix technique. It is a character-based code for human interaction and collaboration.

5 - Seek first to understand, then to be understood

Use empathetic listening to genuinely understand a person, which compels them to reciprocate the listening and take an open mind to being influenced by you. This creates an atmosphere of caring, and positive problem-solving.
The Habit 5 is greatly embraced in the Greek philosophy represented by 3 words:
1) Ethos - your personal credibility. It's the trust that you inspire, your Emotional Bank Account.
2) Pathos is the empathetic side -- it's the alignment with the emotional trust of another person communication.
3) Logos is the logic  -- the reasoning part of the presentation.
The order is important: ethos, pathos, logos -- your character, and your relationships, and then the logic of your presentation.

Combine the strengths of people through positive teamwork, so as to achieve goals that no one could have done alone.

The final habit is that of continuous improvement in both the personal and interpersonal spheres of influence.

Covey explains the "Upward Spiral" model in the sharpening the saw section. Through our conscience, along with meaningful and consistent progress, the spiral will result in growth, change, and constant improvement. In essence, one is always attempting to integrate and master the principles outlined in The 7 Habits at progressively higher levels at each iteration. Subsequent development on any habit will render a different experience and you will learn the principles with a deeper understanding. The Upward Spiral model consists of three parts: learn, commit, do. According to Covey, one must be increasingly educating the conscience in order to grow and develop on the upward spiral. The idea of renewal by education will propel one along the path of personal freedom, security, wisdom, and power.