Many economists have reached an agreement when it comes to raising the minimum wage: it diminishes poverty. Unfortunately, there is a trade-off. When minimum wage is raised, companies may have to lay off workers in order to be able to afford the higher wages of the workers that they decide to keep. This may cause an increase in unemployment, but still keep many above the poverty line. . In Mike Konczal’s article Economists Agree: Raising the Minimum Wage Reduces Poverty, Konczal discusses the positive effect that raising the minimum wage would have on the economy. His opinion is one that I agree with for the most part, but he does not seem to take into account the cost that raising the minimum wage would have on the companies and the unemployment rate. According to Gregory Mankiw’s first principle of economics, “people face tradeoffs,” and society faces the tradeoff between efficiency and equality where the society can either be efficient and get the most out of its scarce resources or make sure that prosperity is evenly distributed among society’s members (Mankiw). Because of elasticity, those who have higher wages after the minimum wage raise will more than likely enter the market for products whether they be luxury items or just more than what they used to buy.

Konczal explains that the raise in wages would “increase… the quality of life for [the] worst off” (Konczal). He also discusses how the wage increase would have “virtually no administrative costs” and how there are significant benefits from raising the minimum wage (Konczal). Konczal explains the benefits of minimum wage increases by “the elasticity of the minimum wage when it comes to poverty reduction” (Konczal). Elasticity is a measure of how much buyers and sellers respond to changes in market conditions (Mankiw). 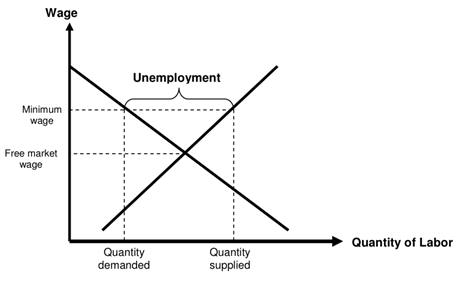 When Konczal states “now, as a general rule with these numbers, you should never observe too far away from the mean,” he means, from my understanding of statistics, that when observing information, it is important to not look too far away from the average. This is because the average give a better understanding of how the majority of what is being analyzed works and when looking at anything too far from the mean, any minor thing can skew the analysis.

In Gregory Mankiw’s Principles of Microeconomics, he discusses the effect of a minimum wage increase and how it would increase unemployment because the minimum wage is a price floor that is above the equilibrium. Konczal does not discuss this effect in his article in depth.

In Thomas Sherrer’s article on Forbes.com titled “Raising the Minimum Wage Will Reduce Opportunities for the Most Vulnerable,” he agrees with Konczal’s opinion that raising the minimum wage would be beneficial to the lower class and he provides the same statistics, but Sherrer focuses more on who would really benefit from the wage increase and how it would affect unemployment.

In conclusion, all of these resources give a clear picture of how a minimum wage increase would affect the poverty stricken, but Mankiw and Sherrer address the tradeoff that society would face if the raise were to happen.

A Complete Beginner's Guide to Strap-On Sex
07-06 13:50 By FullyGotta
The concept that a cisgender lady can strap on a..
Best Sex Toys For Girls - Ways to Select Your In..
07-06 11:54 By FullyGotta
Every person wants to know what the most benefic..
Three Situations Online Pharmacies Are Useful
07-06 11:33 By Robertodeloa..
A person does not know when they'll require drug..
Tech Blog - Find Out about the newest Tech Infor..
07-06 11:03 By dewanhaziri
It is vital to maintain you current in terms of ..
Finding the ideal Tips For Binary Options Tradin..
07-06 06:43 By pepar49937
In the event you are like most binary options tr..