Calisthenics is derived from the Greek word which means beauty. More specifically, calisthenics's speaks to describe the ideal human physique from performing bodyweight exercises. Unlike traditional fitness where barbells, weights and machines are needed to perform exercises, calisthenics can be thought of as a "street workout."

A "street" workout consists of using anything and everything to supplement the training process. For example, if a person is on vacation and has no access to the gym or any equipment, but instead finds a ledge or a bench, these items can be used as substitutes to a workout. Some of these workouts consists of handstands or hand stand pushups on the bench or ledge. Planche and L-sits can also be performed with just a ledge or a bench. Some of these terms may seem unfamiliar or bizarre, but that's because most of these moves are considered intermediate and advanced calisthenic exercises. 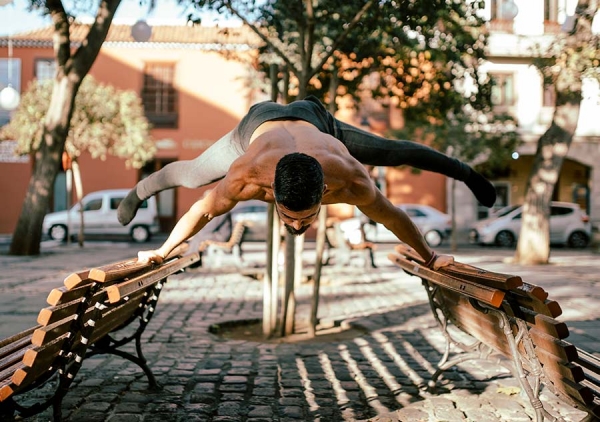 To really understand how these intermediate and advanced movements are performed, the basics of calisthenics must first be explained. Whether a beginner or advanced calisthenics performer, most continue with basic pushups, pull-ups, chin-ups and squats. In addition, to really master calisthenics and perform exercises with the correct movements, one's core needs to be developed. Why? As mentioned before, the basis of calisthenics is the use of one's own body weight. Since the core is at the center of one's body, most the strength should come from there. For example, when performing a pull-up the most ideal way of doing it would be to go straight up and down with minimal sway. Sometimes, people may also use the momentum when coming down from a pull-up, added from the swinging motion to pull themselves up again. If one's core is well-developed, performing a pull-up will engage the core, tightening it, and prevent minimal sway during repetitions of a pull-up. By making sure the core is tight when pulling up and coming down, pull-ups should seem much more difficult (that is assuming a person has done them incorrectly before).

Once a person has mastered these exercises, they can either add weight to their workouts or increase in repetitions. Adding weights might seem contradictory to the prior explanation of calisthenics, but if one wants to make things harder, adding a weight vest or a dip chain would only improve the body's physique. Also, adding weights does not indicate the use of a machine or bench to perform static movements. Pull-ups with weights still consist of the same motion as a regular pull-up and dips with weight still follow the same motion as a regular dip. Adding weights only makes it harder to perform the compound movements involved in calisthenics. If one cannot add weight, repetition is also a good way to improve body-weight training. However, like most gym exercises strength (weights) and endurance (repetition) should be well-balanced. Once and individual is comfortable with performing the basic exercises with ease (15-20 reps each set), then the intermediate and advanced training can begin.