Beverage flavoring systems are a mix of different components, based on natural, nature-identical, or artificial ingredients being combined to create novel flavors. Beverage flavoring systems are regarded as semi-finished products having a limited shelf life and are manufactured according to the highest quality requirements, making production procedures easier, by providing customized flavor solutions for the beverage industry.

With the growing awareness, consumers are looking for healthy alternatives with functional properties and are more inclined toward drinks with natural flavors, natural ingredients, and those that serve functional properties, while also avoiding high-sugar consumption. Natural flavors required in functional drinks should be derived and added from herbs, trees, fruits, or flowers. This promotes the growth of clean-label flavor systems with natural ingredients for various beverage applications.

Some statistics reflecting the growth in fortified drinks consumption are mentioned below:

The global beverage flavoring systems market was valued at USD 3,692.2 million in 2017. It is projected to grow at CAGR of 6.1% from 2018 to reach USD 5,215.6 million by 2023. This growth is attributed to the growing demand for beverages including fortified and non-fortified drinks across the world.

The beverage flavoring systems market, by beverage type, is segmented into alcoholic and non-alcoholic beverages. The market was dominated by the non-alcoholic beverages segment in 2017. The non-alcoholic segment is projected to grow at a significant rate due to the growing consumption of carbonated soft drinks, fruit- & vegetable-based juices, and functional drinks. The carbonated soft drinks and juice industries are major application areas of flavoring systems to enhance the taste of certain drinks. Consumer demand for innovative tastes encourages flavor manufacturers to launch new flavor products. Unusual flavors such as tropical fruits, herbs & spices, floral flavors, beer-flavored non-alcoholic beverages, smoked flavor beverages, and vegan dairy flavors are receiving global attention.

Key Developments in the Market:

Sensient Technologies (US), Givaudan (Switzerland), International Flavors and Fragrances (IFF) (US), Firmenich (Switzerland), and Symrise (Germany) are among the key players in the market. The market players focused on various development strategies such as new product launches, expansions & investments, acquisitions, partnerships, mergers, and collaborations in the last few years to meet the growing demand for beverage flavoring systems.

Some of the major developments in the market are listed below: 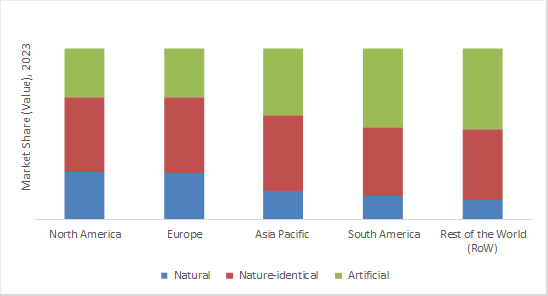 With the growth in the soft drinks market, the demand for innovative beverage flavoring systems is also rising at a fast pace due to consumer inclination toward innovative flavors.

Some of the latest innovative beverage flavor system launches in the market are as follows:

Companies are adopting new technologies such as advanced extraction and non-thermal processes to produce better varieties of beverage flavoring systems with natural and synthetic ingredients for more stability and suitability.

Some other technologies used in beverage flavoring systems for various functions and that have fueled the market growth are as follows:

The growth in demand for plant-based or natural origin flavor systems is attributed to consumer awareness about clean-label products. This has led beverage manufacturers to adopt flavor systems incorporated with clean-label ingredients. According to a study published by the Journal of Food Science in 2017, consumers are willing to pay more for food products labeled as “all-natural” as compared to products without labels. This factor fuels growth of the beverage flavoring systems market players to launch innovative natural products.

Asia Pacific is projected to dominate the market through 2023