The survivors of the shooting at Marjory Stoneman Douglas High School in Parkland, Fla., have broken through a decades-long stalemate in the gun-control debate in ways that no other group of survivors has been able to. 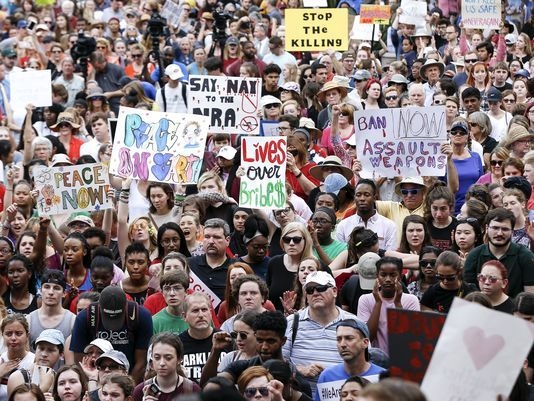 They've persuaded the GOP-controlled state Legislature to consider gun-control measures once deemed off-limits in Tallahassee and sparked marches, protests and school walkouts around the country.

How did that happen? What has been so different from all the other mass shootings over the years that have resulted in the most significant gun-control movement in recent memory?

Experts on social movements say the Parkland students have a variety of factors working for them that weren't there following other massacres. 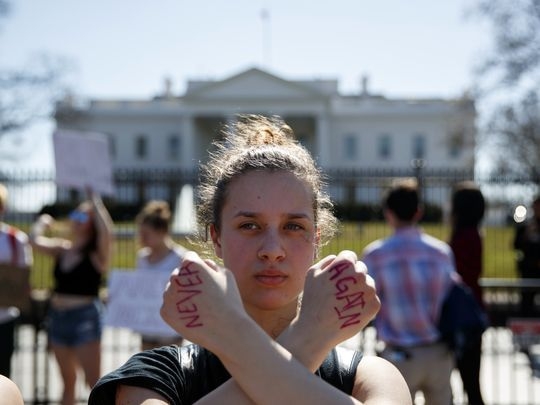 Gwendolyn Frantz, 17, of Kensington, Md., stands in front of the White House during a student protest for gun control

Geography played an important role. The Las Vegas shooter mowed down the largest number of victims in U.S. history (57), but the families of the victims and the survivors of the shooting were scattered throughout the continent, from Canada to California to West Virginia. That made it impossible for them to form a cohesive group to lobby for change.

In Parkland, the students were all in the same school and from the same community. The victims and survivors were study partners, teammates, friends. That allowed them to craft a more communal response rather than suffering through isolated cases of grief, and mourning spread throughout North America.

The state of technology also played a big role. The Columbine High School shooting happened so long ago that students didn’t have social media apps on their phone — no Twitter, no Facebook, no Snapchat. The first iPhone wouldn’t launch for another eight years. That informational vacuum made it difficult for Americans far from Colorado to truly grasp what had just happened, to hear and see and feel the anguish those students were facing.

The Parkland shooting happened in real time. One student posted a video from the floor of his classroom, allowing Americans into that room to hear the gunshots, to hear the cries of those terrified students even as the gunman remained at large.

The age of the students was another important factor. The 6- and 7-year-old survivors of the Sandy Hook Elementary School shooting were too young to go before cameras and plead their case. The Sandy Hook parents protected their kids from rallies and press conferences, making it difficult for Americans to connect directly with the victims and their classmates.

The Parkland kids, who are in their late teens, were able to respond immediately after evacuating the building. They went before the TV cameras that descended on South Florida to vent, cry and show the world exactly what they were feeling and what they were fighting for.

Marshall Ganz, a senior lecturer of public policy at the Harvard Kennedy School, said that "public narrative" helps explain why the Parkland students are connecting with Americans in ways that politicians and advocacy groups cannot.

"Human beings communicate through stories," said Ganz, who spent three decades participating in the civil rights and farm worker movements. "It's how parents teach children, it's how societies teach their moral content. These kids are articulate as hell. Their capacity to tell their story is amazing."

Rory McVeigh, director of the Center for the Study of Social Movements at the University of Notre Dame, said the Parkland students are also benefiting from a broader national environment that is ripe for activism.

He said voters are increasingly dissatisfied with Republicans in the White House and Congress, making them vulnerable to attacks. Pollsters are predicting a big wave for Democrats in the upcoming midterm elections, adding to the political vulnerability of Republicans in charge in Washington and Tallahassee.