Today’s Coronavirus pandemic isn’t a new thing. As humans populated the world, infectious diseases followed along. Outbreaks are nearly constant, but not every virus causes a global pandemic. This blog will take you through some of the deadliest viruses throughout human history.

The earliest recorded pandemic occurred during the Peloponnesian War. As the war raged on, the disease passed through Libya, Egypt, and Ethiopia, and helped in the Athenian victory as it killed 2/3rds of the Spartan population. The disease, which was likely typhoid fever, included symptoms such as fever, thirst, red skin lesions, and a bloody throat and tongue. 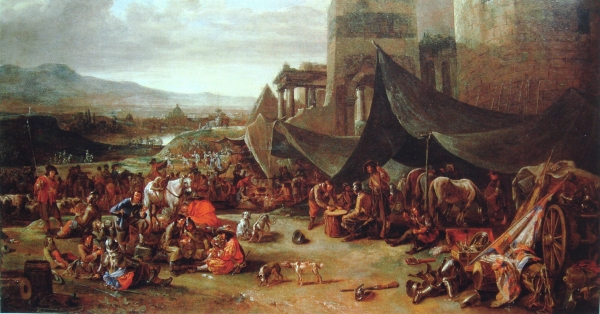 This plague began as smallpox that infected the Huns, which was then carried to the Germans, then to the Romans. As Roman troops came home, they infected the rest of the Roman empire – eventually leading to the death of Marcus Aurelius, their emperor. Symptoms included fever, sore throat, diarrhea, and puss-filled sores.

This harsh disease entailed a fever, diarrhea, vomiting, throat ulcers, and gangrene in the hands and feet. It began in Ethiopia and passed through Africa, Rome, and Egypt. The Cyprian Plague even had recurring outbreaks over the next three centuries, and hit Britain in 444 A.D., harming their war efforts at the time.

The Justinian Plague began in Egypt and spread throughout the Mediterranean, including the Palestine and Byzantine Empires. It continued to plague the empires for two centuries and killed about 50 million people, which was 26% of the world population at the time. The plague ruined the Roman emperor’s plans to bring the empire together, and caused massive economic damages. 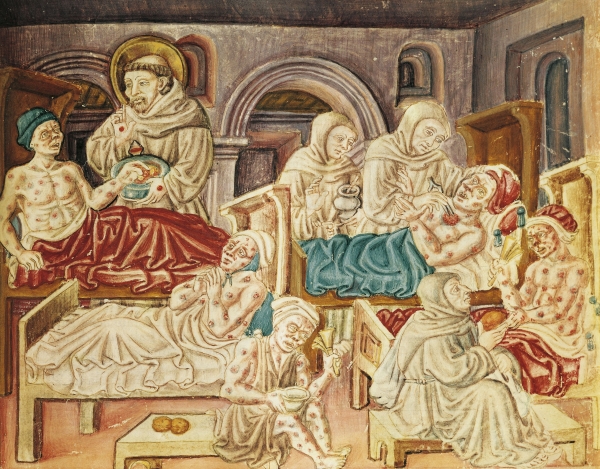 Although leprosy had been around from the beginning of civilization, it turned into a pandemic in Europe in the Middle Ages. Leprosy is a bacterial disease that causes sores and deformities of the skin, and is still present today but can be treated with antibiotics. In the Middle Ages, this pandemic forced Europe to build leprosy-focused hospitals to treat the huge number of victims. It was believed to be a punishment of God, so victims were often ostracized by society as a result of moral judgment.

The Black Death is the second outbreak of the bubonic plague. It began in Asia and moved west, causing the death of 1/3 of the world’s population. There were so many dead bodies that they were left in the streets to rot, causing a constant stench in cities. It became so severe in England and France that they called a truce to their war. 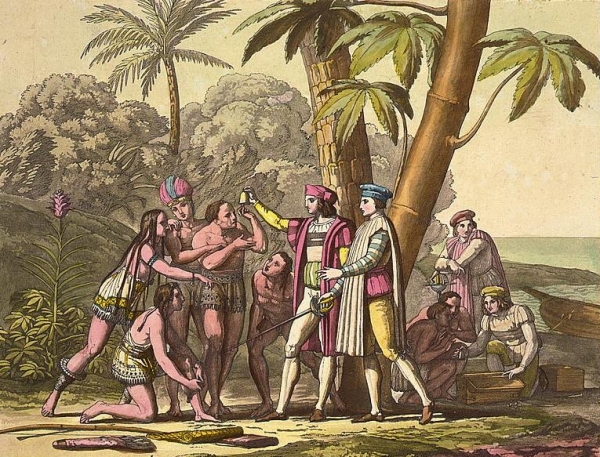 When the Spanish explorers arrived in the Caribbean, they brought along diseases such as smallpox, measles, and the bubonic plague with them. These diseases were then passed along to the native populations, who were especially vulnerable due to no previous exposure to the diseases. This caused the death of almost 90% of the native population. This scenario was repeated yet again when Christopher Columbus arrived on the island of Hispaniola, and in 1520 when African slaves brought smallpox to the Aztecs. In total, historians have concluded that 56 million Native Americans died in the 16th and 17th centuries.

The bubonic plague arose yet again, this time in London, causing the deaths of about 20% of the population (about 3 million people). Hundreds and thousands of cats and dogs were killed, as they were believed to be the cause of the disease. 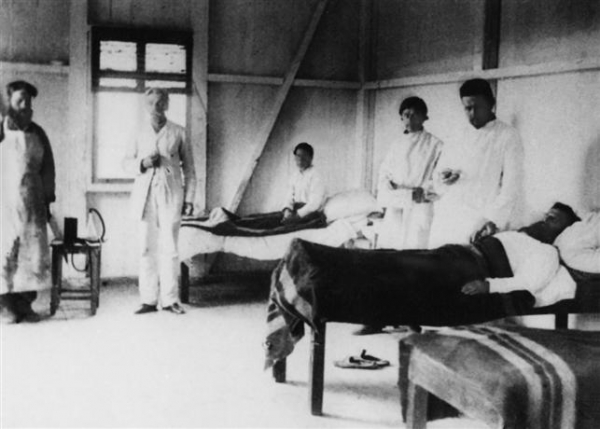 The first of seven cholera outbreaks occurred in 1817. Cholera is a small intestine infection that spreads through feces-infected food and water. It began in Russia and spread to Britain, Spain, Africa, India, Italy, Germany, China, Japan, and America.

This flu started in Siberia, spread to Moscow, made its way to Finland and Poland, and then to the rest of Europe. It eventually affected Africa and North America, as well. By the end of the year, about 360,000 victims died.

The Spanish Flu first began in Madrid the spring, but by October, it had affected the rest of the world, causing over 50 million deaths in total. The flu finally died out by the summer of 1919 when most of the infected had either died or developed an immunity.

Killing over 1.1 million people, the Asian flu began in Hong Kong and affected China, America, and England. A second wave of this flu hit the following year, causing even more causalities. The flu was eventually contained once a vaccine was developed. 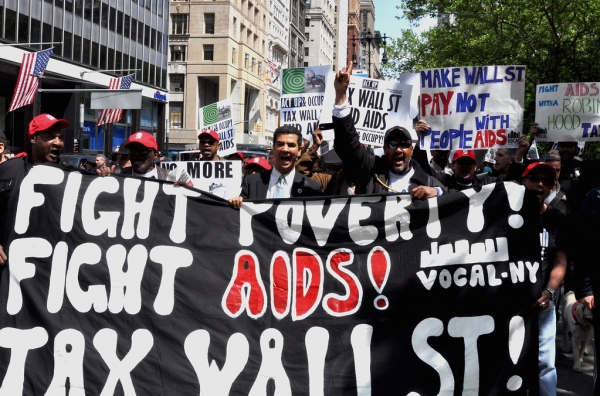 AIDS is believed to have developed in West Africa in 1920 and spread to America in the 1970s. A person who contracts the HIV virus may have a fever, headache, and enlarged lymph nodes. Once the symptoms subside, the carrier becomes highly infectious through blood and genital fluid. AIDS destroys the immune system, making the victim highly likely to die from diseases that the body can typically fight off otherwise. This disease is still around today, and has caused the deaths of over 35 million people worldwide. While there are treatments to slow the progress of the disease, a cure has still not been found.

SARS stands for “Severe Acute Respiratory Syndrome.” It is believed to have developed in bats, spread to cats, then to people in China, and then to the rest of the world. SARS is a respiratory disease that includes a dry cough, fever, and head and body aches. It spreads through coughs and sneezes. It infected over 8,000 people, and killed 774 people.

This flu was transmitted from pigs to humans, and consists of symptoms such as chills, fever, sore throat, muscle and head pains, coughing and shortness of breath, weight loss, and bodily weakness. Globally, it infected 31,156 people and killed 1,841 people. Death usually resulted from respiratory failure, pneumonia, or high fever.

Symptoms of Ebola include a fever, sore throat, muscle pain, headaches, vomiting, diarrhea, and skin rash. Once the disease progresses, it leads to the decreased function of the liver and kidneys, causing internal bleeding. It was an airborne disease that also spread through the bodily fluids of an infected person. A vaccine was developed that stopped the spread of the virus, but it ended up resulting in the infection of 28,616 people and the death of 11,310 people. 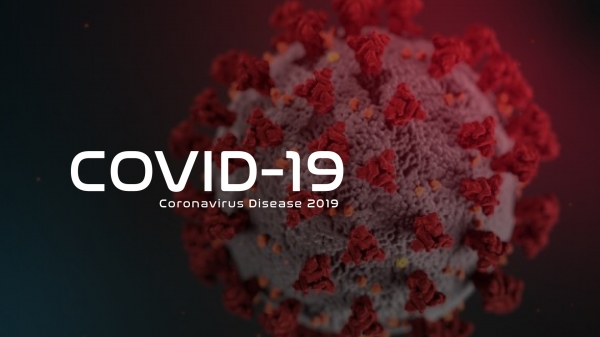 The Coronavirus started in China and is now affecting the rest of the world. As of right now, this virus has infected over 118,000 people worldwide. The Coronavirus is in the same virus family as SARS and the common flu, and it includes similar symptoms, including fever, coughing, and respiratory problems. It also spreads through droplets from sneezes and coughs, and can lead to pneumonia and even death. Without an available vaccine, the virus is continuing to spread throughout the world. On the date this blog was posted, the Coronavirus has infected 785,777 people and caused 37,815 deaths.