The brewing enzymes market is estimated at USD 352.1 million in 2018. It is projected to reach USD 484.7 million by 2023, at a CAGR of 6.6% from 2018, in terms of value. The use of enzymes has become increasingly important in the brewing industry, as they accelerate the chemical reaction without a change in their own structure. To enhance the brewing process, commercial exogenous enzymes are used in various steps to make the brewing faster, easier, and more consistent. The demand for brewing enzymes in the beer segment is expected to witness significant growth in the near future, due to the rising popularity of beer consumption among young consumers, rise in technological innovations, and growth in the craft beer segment and number of microbreweries.

The years and periodization considered for the study are as follows: 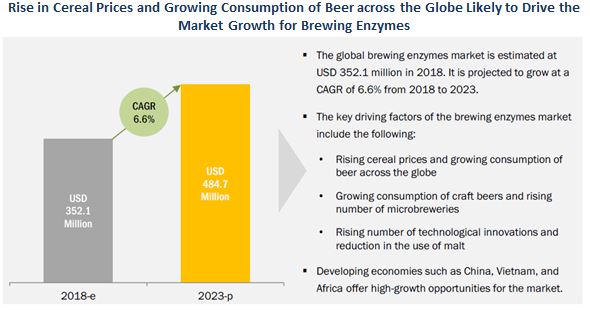 The increase in popularity of craft breweries and specialty beers, continuous R&D resulting in product and process innovations, increasing per capita income in Asia Pacific region, and forecasted high cereal price trend are expected to drive the demand for brewing enzymes in beer and wine applications. Usage of enzymes in the brewing industry can cut costs, improve beer stability, and control flavor, in addition to providing higher productivity and reducing waste generation.

The amylase segment is expected to dominate the brewing enzymes market through 2023.

In 2017, the amylase segment accounted for a larger share, by type, in the brewing enzymes market, in terms of value. Amylase is a catalytic enzyme that enables the conversion of starch to form diverse products such as dextrins, oligosaccharides, maltose, and some glucose molecules. Amylases are mainly used in industries because of their cost-effectiveness and less-time-consuming processes; they are also easy to modify and optimize processes involving them. Microorganisms are considered the best source of these enzymes. The consumption of amylase is significant in the Asia Pacific and African regions, due to limited availability of malt. With more malt used in the brewing process, enzyme requirement is low. Thus, in regions such as Asia Pacific and Africa, where they have limited access to malt, enzymes are widely used to convert non-malted sources of carbohydrates into fermentable sugars.

The beer segment to dominate the brewing enzymes market through 2023.

Beer is the major application in which brewing enzymes are most widely used. The consumption of brewing enzymes depends on the amount of beer produced. The major enzymes that are used to produce beer include amylase, beta-glucanase, and protease. The increasing use of brewing enzymes in the beer segment can be attributed to the high production of craft beer since it is gaining popularity, especially among young consumers, due to its new flavors, varieties, and labels. Further, the growth of microbreweries is also driving the use of enzymes in the beer segment.

Asia Pacific is projected to be the fastest-growing regional market for brewing enzymes.

The Asia Pacific region is projected to be the fastest-growing market for brewing enzymes over the next five years, owing to an increase in overall economic growth, with diversity in income levels, technology, and demand from end consumers leading to enhanced scope for future growth. The main countries contributing significantly toward the growth of the market in this region are China, Japan, and Vietnam. The malt that is produced in China for beer production is facing a deficit in barley; hence, manufacturers are focusing on building malt production units due to the ongoing increase in domestic demand. Due to barley deficit in this region, commercial enzymes are added to improve the quality of the beer and to fulfill the domestic demand for beer, which drives the usage of enzymes in the brewing process.

In this region, countries such as China and Japan are expected to account for a major share of the market. Vietnam is projected to be one of the fastest-growing markets for brewing enzymes in the Asia Pacific region.