The potato processing market is projected to grow at a CAGR of 5.3% from 2017, to reach a projected value of USD 30.85 Billion by 2022. Easy availability, convenient packaging, rapid urbanization, change in eating habits, and improvement in the standard of living are the major factors that have driven the global market in recent years. Other factors such as the growth in consumer preferences for convenience foods to save time and efforts, coupled with the rise in demand for applications such as snack foods and prepared ready meals, are expected to drive the growth of the this market during the forecast period.

The years considered for the study are as follows: 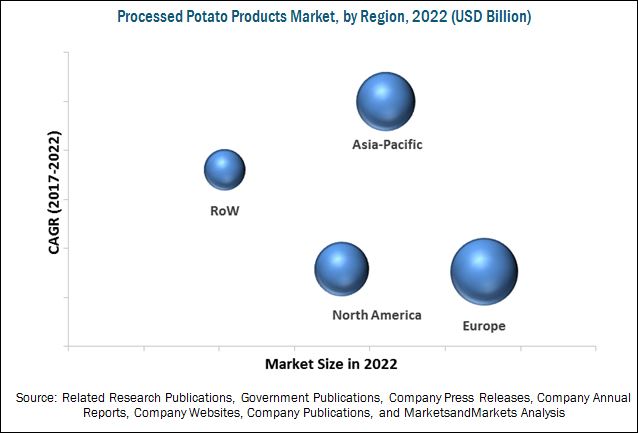 Objectives of the study are as follows:

Frozen potato processing estimated to be the largest segment in 2017

The frozen segment is estimated to account for the largest market share in the potato processing market in 2017. Frozen potato products are considered as the most widely used potatoes owing to their prolonged shelf life and the lesser time required for meal preparation. The increasing demand for french fries in regions such as Asia-Pacific, the Middle East, and South America due to the expansion of quick service restaurants (QSRs) and retail channels is the major factor attributing in its growth. McDonalds, Burger King, Dunkin Donuts, and Subway are some of the major QSRs contributing to the growth of the frozen potato market.

Foodservice: The most widely preferred distribution channel for potato processing

The foodservice segment accounted for a larger share of the potato processing market, in terms of value and volume, in 2016. Factors such as an increase in demand for fast food, the rise in the population of working women, and growth of food delivery channels are some of the major factors driving the growth of the foodservice segment. The growing number of national and international brands in the hotel industry along with high contribution of quick service restaurants is expected to drive the demand for potato processing in the foodservice sector during the forecast period.

The Asia-Pacific market is projected to grow at the highest CAGR during the forecast period. The most dominant factor in the region affecting the potato processing market is the dense population across most of the countries, coupled with the high production of potatoes. Government policies such as foreign direct investment (FDI) in developing economies, along with an increase in the number of business deals such as mergers, acquisitions, and investments, have assisted in the development and the growth of value-added potato processing products. The tremendous growth is majorly observed in the processed potato industry of Southeast Asia. Growing urbanization in countries such as China and India is supporting the growth of the potato chips market in this region.