From Wikipedia, the free encyclopedia
(Redirected from Anza-Borrego State Park)

ABDSP is around a two-hour drive northeast from San Diego, southeast from Riverside or Irvine, and south from Palm Springs. The park is an anchor in the Mojave and Colorado Deserts Biosphere Reserve, and adjacent to the Santa Rosa and San Jacinto Mountains National Monument. 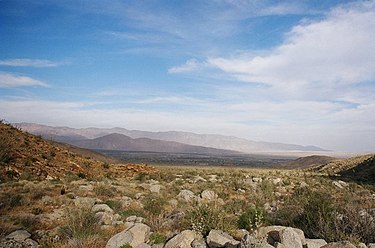 ABDSP includes 500 mi (800 km) of dirt roads, 12 designated wilderness areas, and 110 mi (180 km) of hiking trails to provide visitors with many opportunities to experience the park's unique version of the Colorado Desert environs. Park information and maps, interpretive events and displays and listening devices for the hearing impaired are all available in the Visitor Center.[2] ABDSP has Wi-Fi access to the Internet in various sections of the park, as do 55 other California state parks.

Many visitors approach ABDSP from the east-Coachella Valley side via California County Route S22 and S78. Visitors can also approach from the west-Pacific Ocean side via California County Routes S79 or S67 and add experiences of passing through the high and forested Laguna Mountains, such as in Cuyamaca Rancho State Park.[3] These highways climb from the coast to 2,400 ft (730 m) above sea level, then descend 2,000 ft (610 m) down into the Borrego Valley in the center of the park. The great bowl of the surrounding desert is surrounded by mountains, with the Vallecito Mountains to the south and the highest Santa Rosa Mountains to the north. They are in the park's wilderness area, without paved roads and with the only year-round creeks in ABDSP.

See also: Category:Flora of the California desert regions and Category:Fauna of the Colorado Desert 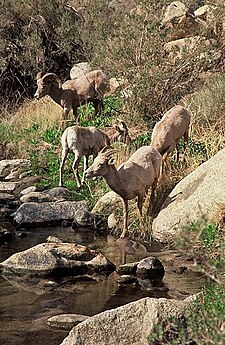 The habitats of ABDSP are primarily within the Colorado Desertecosystem of the Sonoran Desert ecoregion. The higher extreme northern and eastern sections in the Peninsular Ranges are in the California montane chaparral and woodlands ecoregion.

ABDSP has natural springs and oases, with the state's only native palm, the California fan palm (Washingtonia filifera). Seasonal wildflower displays can be stunning in any plant community association throughout the park. The high-country to the north and east has closed-cone pine forests, manzanitas and oak woodlands.

[6]===Desert bighorn sheep=== Some areas of ABDSP are habitat for the Peninsular bighorn sheep, often called desert bighorn sheep. Few park visitors see them, and the sheep are justly wary. A patient few observers each year see and count this endangered species to study the population, and to monitor its current decline from human overpopulation encroachment.[7] 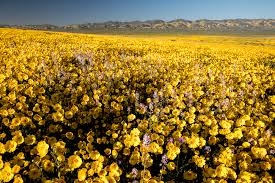 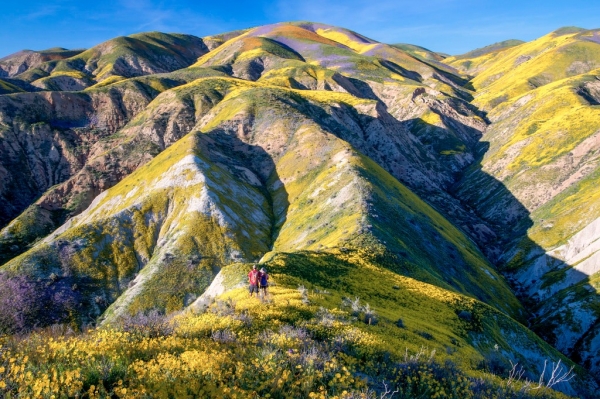 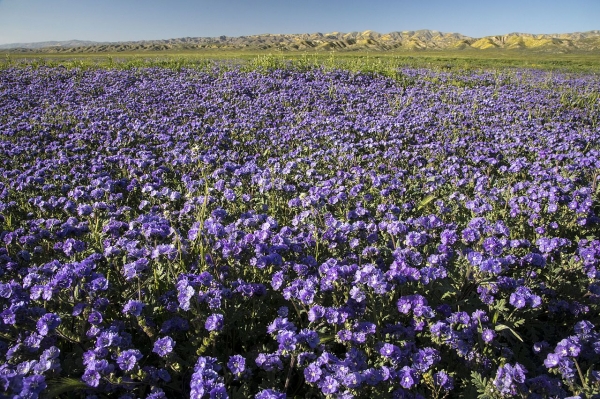 The expanses of ABDSP's eroded badlands also provide a different view into the region's long-vanished tropical past. The inland of southeastern California was not always a desert. Paleontology, the study of the fossilized remains of ancient life, is the key to understanding this prehistoric world. ABDSP has an exceptional fossil record which includes preserved plants, a variety of invertebrate shells, animal tracks, and an array of bones and teeth. Most fossils found in ABDSP date from six million to under a half million years in age (the Pliocene and Pleistocene epochs), or about 60 million years after the last dinosaur age ended.[8] 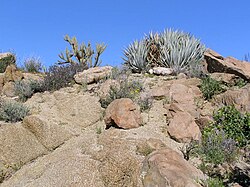 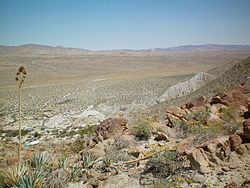 ABDSP lies in a unique geologic setting along the western margin of the Salton Trough. This major topographic depression with the Salton Sink having elevations of 200 ft (61 m) below sea level, forms the northernmost end of an active rift valley and a geological continental plate boundary. The trough extends north from the Gulf of California to San Gorgonio Pass, and from the eastern rim of the Peninsular Ranges eastward to the San Andreas Fault zone along the far side of the Coachella Valley. Over the past 7 million years, a relatively complete geologic record of over 20,000 ft (6,100 m) of fossil-bearing sediment has been deposited within the park along the rift valley's western margin. Paleontological remains are widespread and diverse, and are found scattered over hundreds of square miles of eroded badlands terrain extending south from the Santa Rosa Mountains into northern Baja California in Mexico.

Both marine and terrestrial environments are represented by this long and rich fossil record. Six million years ago, the ancestral Gulf of California filled the Salton Trough, extending northward past what would become the city of Palm Springs. These tropical waters supported a profusion of both large and small marine organisms. Through time, the sea gave way as an immense volume of sediment eroded during the formation of the Grand Canyon spilled into the Salton Trough. Little by little, the ancestral Colorado River built a massive river delta across the sea way. Fossil hardwoods from the deltaic sands and associated coastal plain deposits suggest the region received three times as much rainfall as now.

The Anza-Borrego region gradually changed from a predominately marine environment into a system of interrelated terrestrial habitats. North of the Colorado River Delta and intermittently fed by the river, a sequence of lakes and dry lakes has persisted for over three million years. At the same time, sediments eroded from the growing Santa Rosa Mountains and other Peninsular Ranges to spread east into the trough. These sediments provide an almost unbroken terrestrial fossil record, ending only a half million years ago. Here, the deposits of ancient streams and rivers trapped the remains of wildlife that inhabited a vast brushland savannah laced with riparian woodlands.

This record of changing environments and habitats includes over 550 types of fossil plants and animals, ranging from preserved microscopic plant pollen and algalspores to baleen whale bones and mammoth skeletons. Many of the species are extinct and some are known only from fossil remains recovered from this park. Combined with a long and complete sedimentary depositional sequence, these diverse fossil assemblages are an unparalleled paleontologic resource of international importance. Both the Pliocene-Pleistocene epoch boundary and the Blancan-Irvingtonian North American land mammal ages boundary fall within the long geological record from the Anza-Borrego region. Environmental changes associated with these geological time divisions are probably better tracked by fossils from the Anza-Borrego region than in any other North American continental platform stratum. These changes herald the beginning of the Ice Ages, and the strata contain fossil clues to the origin and development of modern southwestern desert landscapes.

The first fossils, marine shells from the ancient Gulf of California and freshwater shells from a prehistoric era Lake Cahuilla, precursor of present-day Salton Sea, were collected and described by William Blake in 1853. Blake was the geologist and mineralogist for the Pacific Railroad Surveys commissioned by Congress and President Franklin Pierce to find a railway route to the Pacific. Blake first named this region the Colorado Desert. 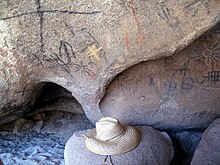 Since the late 19th century, numerous scientific studies and published papers have centered on the marine organisms that inhabited the ancient Gulf of California. Fossil assemblages from the classic 'Imperial Formation' include calcareousnanoplankton and dinoflagellates, foraminifera, corals, polychaetes, clams, gastropods, sea urchins, sand dollars, and crabs and shrimp. The deposits also yield the remains of marine vertebrates, such as sharks and rays, bony fish, baleen whales, walruses and dugongs.

Marine environments such as outer and inner shelf, platform reef, and near shore beach and lagoon, are all represented within the "Imperial Formation". As the sea became more shallow, estuarine and brackish marine conditions prevailed, typified by thick channel deposits of oyster and pecten shell coquina that now form the "Elephant Knees" along Fish Creek. Many of the marine fossils are closely related to forms from the Caribbean Sea. They document a time before the Isthmus of Panama formed, when the warm Gulf Stream of the western Atlantic Ocean invaded eastern Pacific Ocean waters.

As North and South America connected about three million years ago, terrestrial faunal north-south migrations began on a continental scale called the Great American Interchange, and are present in Anza-Borrego's fossils. Animals such as giant ground sloths and porcupines made their first appearance in North America at this time.

The oldest terrestrial vertebrate fossils from the Colorado Desert predate the late Miocene invasion of the Gulf of California. These very rare fossils, which include a gomphothere (elephant-like mammal), rodent, felid and small camelid, and were collected from 10– to 12-million-year-old riverine and near-shore lake deposits. However, the most significant and abundant vertebrate fossils have been recovered from the latest Miocene through late-Pleistocene riverine and flood plane deposits of the Palm Spring Formation in the Vallecito and Fish Creek Badlands and Ocotillo Conglomerate exposed in the Borrego Badlands. These fossil assemblages occur in a 3.5-million-year-long, uninterrupted stratigraphic sequence that has been dated using horizons of volcanic ash and paleomagnetic methods.

The bestiary for this savannah landscape includes some of the most unusual creatures to inhabit North America – animals such as:
Geochelone, a giant bathtub-sized tortoise; Aiolornis incredibilis, the largest flying bird of the Northern Hemisphere, with 17-ft (5.2-m) wing span; Paramylodon, Megalonyx and Nothrotheriops, giant ground sloths, some with bony armor within their skin; Pewelagus, a very small rabbit (paleontologists can name with a sense of humor); Borophagus, a hyena-like dog; Acrtodus, a giant short-faced bear; Smilodon, a saber-toothed cat; Miracinonyx, the North American cheetah; Mammuthus imperator, the largest known mammoth; Tapirus, an extinct tapir; Equus enormis and Equus scotti, two species of extinct Pleistocene horses; Gigantocamelus a giant camel; and Capromeryx minor, the dwarf pronghorn. 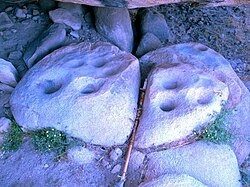 The Native Americans of the surrounding mountains and deserts included the Cahuilla, Cupeño, and Kumeyaay (Diegueño) Indian tribes. It was the homeland of these peoples for thousands of years, and their artists created petroglyph and pictogram rock art expressing their cultures.[9]

The Anza-Borrego Foundation (ABF), founded in 1967, is a non-profit educational organization and is the sole cooperating association of ABDSP. It manages all sales at the State Park Visitor Center and State Park Store. The Anza-Borrego Institute, the education arm of ABF, provides in-depth educational courses to more than 100,000 visitors each year. The institute offers in-depth field programs, a fifth grade environmental camp, citizen science research, and Parks Online Resources for Teachers and Students. ABF's mission is to protect and preserve the natural landscapes, wildlife habitat, and cultural heritage of ABDSP for the benefit and enjoyment of present and future generations.[10]

Do You need Video Production Services?
03-02 20:16 By tediye7916
Technologies has produced a lot of possibilities..
Where Can I Get the Best Mobile Case for Poco X3..
03-02 20:07 By jainyugal6
As you all know that Poco X3 is one of the most ..
Oil and Gas Executive Recruiter Agency Texas
03-02 22:32 By energysearch..
Original Source: https://energysearchassociates...
The Zettelkasten Method for Distributed Teams
03-02 22:26 By jamesnells
Have you come here looking for knowledge? Th..
In which Situations You Need 24 Hour Emergency D..
03-02 22:23 By brianahallis..
People are not aware of their dental health. The..