The report "Organic Feed Market by Type (Cereals & Grains, Oilseeds), Form (Pellets, Crumbles, Mashes), Livestock (Poultry, Ruminants, Swine, Aquatic Animals), Additives (Amino Acids, Enzymes, Vitamins, Minerals, Phytogenics), and Region – Global Forecast to 2025" The global organic feed market size is estimated at USD 6.8 billion in 2019 and is projected to reach USD 10.1 billion by 2025, recording a CAGR of 6.8% during the forecast period. The market growth is driven by the increasing demand for organic food, rising organic livestock farming, expansion of organic farmlands, and the contribution to the environment. Developing countries in South America are projected to create lucrative opportunities for organic feed manufacturers in the coming years. 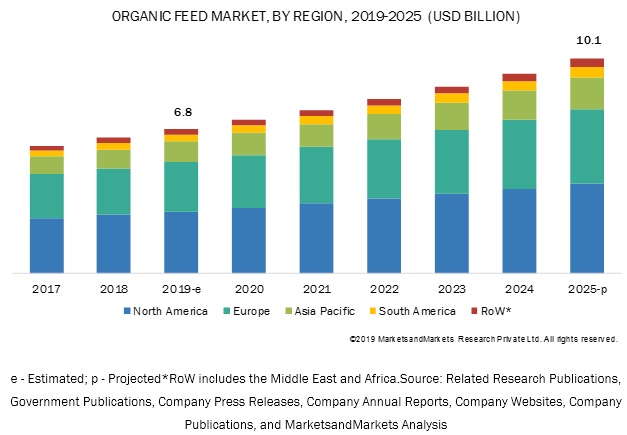 Feed safety has become a matter of concern for many governments around the world, particularly those in North America and Europe. Consumers around the world are becoming more aware and informed about the extrinsic attributes of the meat they consume. Due to these factors, the importance of organic feed is increasing among consumers globally.

In conventionally produced feed, pesticides and insecticides are utilized widely, which may cause poisoning to feed crops, as certain bacteria such as E. Coli or Salmonella respond to these crop protection products. The consumption of feed products, which are made from these contaminated crops, have an adverse impact on the health of animals, and thereby, cause contamination in products, such as milk, egg, and meat derived from animals. Such pathogenic and parasitic diseases in meat products due to Salmonella, Listeria, and E. coli have raised concerns over meat quality and safety in the past decade.

For instance, in 2017, eggs contaminated with pesticide fipronil were found in Belgium and the Netherlands. In August 2017, a meat and egg quality issue arose in Germany, where a supermarket chain, Aldi, withdrew eggs from its shelves in Germany after the tests showed the possibility of insecticide contamination. Millions of eggs were recalled from shops and warehouses in these countries in the same year. Many countries, including South Korea and Slovakia, banned pork imports from Germany in the same year due to the health risks involved.

Due to these instances, the demand for nutrition and safe feed, such as organic feed, has increased across the region. In addition, the use of organic feed provides balanced nutrition to animals and protects them against such harmful risks. It also plays a key role in overcoming issues related to animal feeding assurance, environment-friendly meat production, and animal welfare. Organic feed provides nutrition, which helps in improving the productivity of livestock, besides maintaining the quality of feed products. Thus, growers in this region are focusing on producing organic feed to prevent livestock from exposure to pesticide contamination, which in turn, is projected to drive the growth of the global organic feed market.

Key questions addressed by the report: