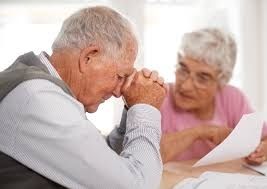 The steady erosion of Medicare and Social Security benefits, the shift away from defined benefit pensions, and rising health care costs have all been blamed for seniors’ financial woes over the last decade.

Now a group of researchers has the bankruptcy data to prove it.

Since 1991, the rate of Americans aged 65 to 74 filing for bankruptcy doubled, while the frequency tripled for those over 75 according to new study by researchers from the Consumer Bankruptcy Project. In addition, one out of every seven bankruptcy filers in the United States is aged 65 or older.

“This is nearly a five-fold increase over just two and a half decades,” the researchers, four professors at U.S. universities, wrote. “This is a notable demographic shift.”

The study, first reported in Sunday’s New York Times, bases its data on surveys collected between February 2013 and November 2016. The researchers asked 3,200 people who had declared bankruptcy about the circumstances that led them to take such a dramatic choice, and the reasons for older Americans frequently came down to medical expenses and debt.

“My wife developed medical problems and had to leave her job, resulting in a loss of income,” one respondent told the researchers. “About two years later, I developed medical problems and was not able to continue working. We got to a point where we simply could not handle the debt load. The constant calls from bill collectors forced us to contact an attorney for help.”

That individual was one of 62.2% who identified medical expenses as a key reason they entered bankruptcy, with many placing the blame on reduced government benefits for seniors. For instance, one respondent was forced into bankruptcy after a back surgery spurred several tests not covered under insurance.

“The next thing I knew, the bills began piling up,” the respondent wrote. “I got to the point I owed more than I was making on Social Security. To get out from under these medical bills I had to file bankruptcy.”

The Consumer Bankruptcy Project team also takes aim at policies that have increasingly pushed the retirement burden on individuals and not the government or employers — for instance, the steady replacement of pensions with self-managed 401(k) and IRA plans. In one case, a respondent noted that he or she mismanaged a retirement account while dealing with depression. Unable to restructure the debts incurred by unwisely leveraging the account, and with no job, the respondent turned to bankruptcy.

Lack of employment opportunities for older Americas only compounds the effects that bankruptcy has on seniors. Whereas younger filers can reasonably expect to return to a solid financial footing with the help of their careers, older people have no such luxury.

“Realistically, when older Americans file bankruptcy, they are most likely to experience a long-term, probably permanent second-class economic status,” the researchers write.

The only solution, in the researchers’ eyes, is to focus on strengthening the social safety net that has been weakened over the years since Lyndon Johnson’s Great Society legislation ushered in Medicare and Medicaid.

“At the core, the lessons of prior decades show that aid to older citizens must originate with our government,” the group concludes. “Community and charitable organizations, while having the best of intentions, are inadequate. Comprehensive policies led by our government will ensure financial stability for all elderly citizens.”