A robot has passed the written test of China's national medical licensing examination, an essential entrance exam for doctors, making it the first robot in the world to pass such an exam. 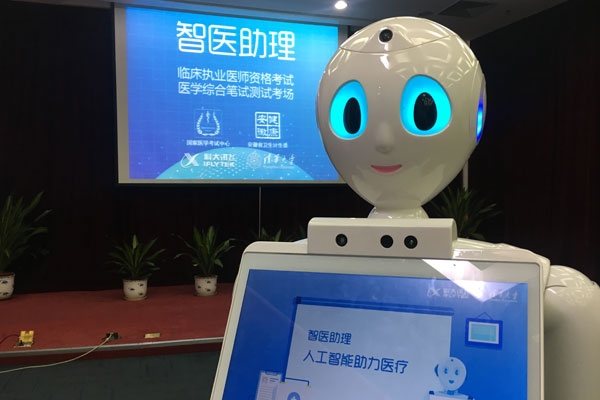 The artificial-intelligence-enabled robot can automatically capture and analyze patient information and make initial diagnosis. It will be used to assist doctors to improve efficiency in future treatments, iFlytek said.

This is part of broader efforts by China to accelerate the application of AI in healthcare, consumer electronics, and other industries.

Liu Qingfeng, chairman of iFlytek, said, "We will officially launch the robot in March 2018. It is not meant to replace doctors. Instead, it is to promote better people-machine cooperation so as to boost efficiency."

The Hefei, Anhui province-based company is conducting a pilot project with the Anhui Provincial Hospital to see how the AI robot can assist doctors in real medical cases.

Unlike the United States tech company IBM's AI-enabled Watson system, which only focuses on the treatment of cancer and major diseases, iFlytek is stepping up push to explore how to use AI to both cure cancer and train general practitioners.

iFlytek is a leading player in China's AI industry. Its AI-enabled user interface platform has accumulated 460,000 third-party developer teams in the past seven years.

On Wednesday, the company became a member of the AI alliance set up by the Chinese Academy of Sciences, which aims to promote the research of basic sciences and the application of the cutting-edge technology.

In October, iFlytek said it will set up a 1.02 billion yuan ($150 million) fund to support software and hardware developers.

Hu Yu, executive president of iFlytek, said the fund will be used to finance startups that have core technologies but lack business know-how, or companies that excel in commercializing products but are unable to integrate AI into their devices.

"As a company born out of the University of Science and Technology of China, we have been focusing on voice recognition technologies for 18 years. We know what problems technology-oriented startups will face and how to help traditional companies upgrade themselves through AI," Hu said.

The company's efforts are in line with the central government's call to turn China into a country of innovators and to reach the frontiers of science and technology.